How to Make Progress in Stoicism: Some Advice from Seneca by David Fideler 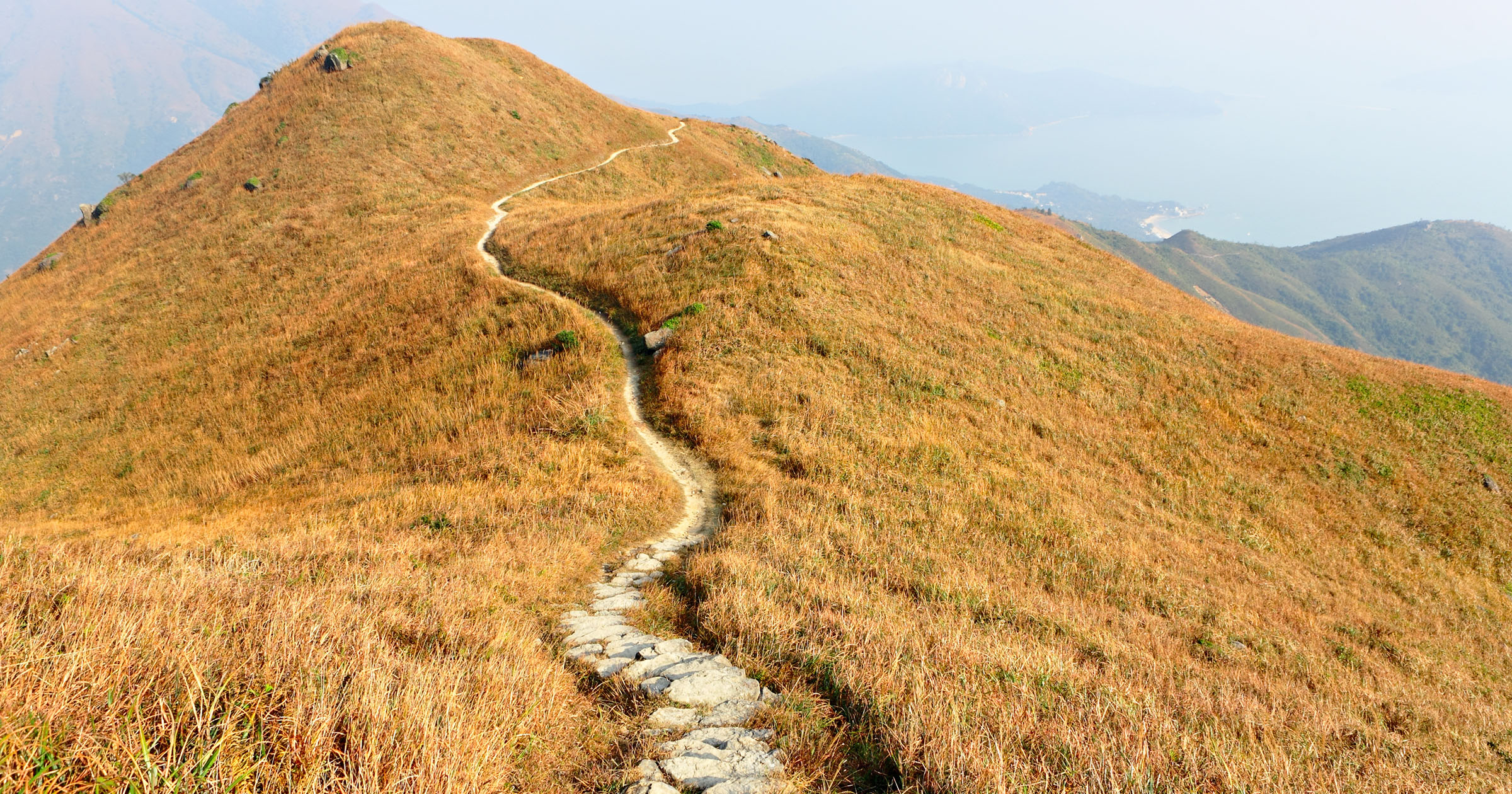 For Seneca, Stoicism is a philosophical path that we progress along to develop a better character.

Well-being is arrived at little by little—but, in itself, is no small thing. —Zeno of Citium

“Progress” was a central idea in Stoicism, and it is most fully discussed in Seneca’s famous Letters on Stoicism, written to his friend Lucilius. There are many ways to look at Seneca’s letters, but one fruitful way is to see them as an introductory course to Seneca’s unique brand of Stoicism. In the Letters, Seneca frequently mentions the idea of making progress, encouraging both Lucilius and himself to do so.

This idea goes back to the earliest Greek Stoics. Zeno of Citium, the founder of the Stoic school, is reported to have said, “Well-being is arrived at little by little” (Diogenes Laertius 7.1.26). What this means is that making progress is an incremental or step-by-step process. Significantly, an ancient Greek student of Stoicism was called a prokoptо̄n, literally “one who is making progress.”

Of course, the goal of making progress is to become a more virtuous person with an excellent inner character, which also results in eudaimonia—well-being, peace of mind, and a life that is truly worth living.

The Roman Stoicism of Seneca, Epictetus, and Marcus Aurelius focused mainly on ethics or character development. If you do a very close reading of Seneca’s philosophical writings, you’ll discover that all the important ideas of Roman Stoicism can be found there, including the famous “dichotomy of control,” which is usually attributed to Epictetus: some things are “up to us,” while other things are “not up to us.” (See figure below.) 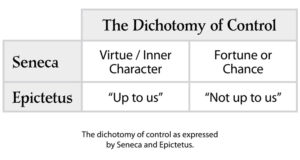 For Seneca, the dichotomy of control refers to the difference between Virtue (our inner character, which is up to us) and Fortune or chance (which is not up to us, or not fully up to us). Fortune can be good or bad. For Seneca, the universe can give us wonderful gifts like wealth, a beautiful family, and a lovely house, which we should certainly appreciate and be grateful for. But, as Seneca and Epictetus both tell us, these gifts of fortune are only “on loan to us” from the universe. At some point, these gifts of Fortune will need to be returned or “given back.” By contrast, the inner virtues we possess and have developed (which I call “real goods”) are ours to keep; but the gifts of Fortune are temporary and impermanent.

Don’t demand that I should be equal to the best, but better than the worst. It’s enough for me if, every day, I reduce the number of my vices and correct my mistakes. —Seneca, On the Happy Life 17.3

Roman Stoicism is a kind of path that focuses on making small, incremental amounts of progress each day, one step at a time. Of course, no one is perfect, and that’s why Stoicism, at least in part, is a practice: and it’s not just a practice that you undertake, but something that you practice at—in the same way a musician or an athlete practices—to get better at what you do. And, like getting better at anything, Seneca notes, “most of progress consists in the desire to make progress” (Letters 71.36).

Every day new situations arise that test our characters in small or significant ways, giving us ongoing opportunities to be mindful, virtuous, and to make the best (or wisest) judgments possible.

The Meditations of Marcus Aurelius highlights the fact that Stoicism is a daily or incremental practice. Over the course of many days, Marcus reflected in his private journal on how to live a better life. By writing these notes to himself, he rehearsed his Stoic beliefs and reflected on how he could apply them in his life. That’s also one of the reasons Seneca wrote his philosophy in letters. Each day brings a new opportunity for self-reflection and progress, and a series of letters is itself “a work in progress”—just as developing one’s character is a work in progress, too.

Other Stoic exercises show progress to be incremental, like the daily review of one’s activities before bedtime, which Seneca and other philosophers practiced. In this exercise, Stoics would examine their mistakes during the day and consider how to act better in the future. As Seneca explains, after his wife has fallen asleep, “I carefully examine my entire day and review my deeds and words. I don’t hide anything from myself, and overlook nothing. For why should I fear anything from my errors, when I’m able to say: ‘Make sure you don’t do that any longer, and now I forgive you.’?” (Seneca, On Anger 3.36.3–4).

In the various forms of this simple practice, one asked several questions:

As we can see, especially from this exercise, a Roman Stoic was encouraged to review his or her behavior each day to make steady, incremental progress.

Stoicism As A Path: Having A Real Destination

Those who follow a path have a destination, but wandering is limitlessness. —Seneca, Letters 16.9

Seneca mentions the idea of travel often and uses it as a metaphor, especially when discussing the importance of having an actual destination instead of just wandering.

We can see how having a real destination perfectly ties in with the idea of Stoicism being a path because a path exists to take you somewhere. The way that Seneca repeatedly contrasts the idea of having a real destination with the idea of just wandering cannot be due to chance. Instead, it’s a brilliant and intentional metaphor to explain his overall understanding of Stoicism and the importance of focus and consistency in making progress. Ultimately, the final goal or destination for a student of Stoicism is to become virtuous—to develop a strong, stable, and joyful character that is not blown here or there by the winds of Fortune or chance.

“Those who follow a path,” Seneca writes, “have a destination, but wandering is limitless” (Letters 16.9). While travel is fine, the desire to travel constantly is akin to wandering; it’s a sign of “disquiet” or “an unsteady spirit” (Letters 69.1). “As you progress,” Seneca tells Lucilius, “take pains above all to be consistent with yourself,” because “a change of purpose shows that the mind is drifting at sea, appearing here and there, as if blown around by the wind” (Letters 35.4).

While researching my book Breakfast with Seneca (with the help of a database for organizing Stoic ideas), I came to see that Seneca used these kinds of metaphors consistently to describe how people on the Stoic path tend to differ from non-Stoics. We can easily sum up these differences in a chart, shown below. I now call this table “The Stoic Mirror” for two reasons. First of all, it’s made up of different pairs of dichotomies, which are mirror opposites of one another, taken from the writings of Seneca. Secondly, it’s a “mirror” that you can look into every now and then, or even daily, to get a sense of how well you are doing in your Stoic practice. In addition to providing a destination to aim for, it also lets you reflect on what kind of progress you’ve been making. 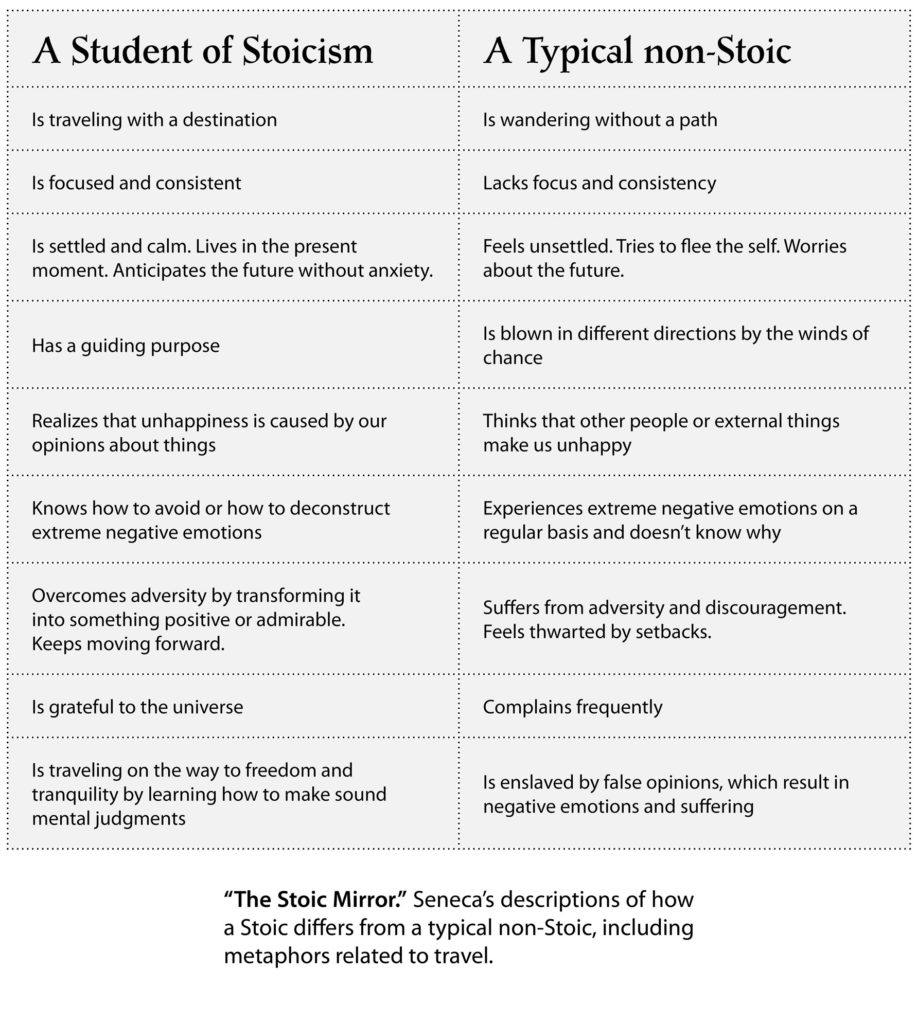 I find this tool, derived from Seneca’s writings, to be very helpful indeed. A quick glance can keep you moving in the right direction. In addition, it can serve as a tool to inspire good behavior, and serve as a reminder when we wander off the path.

David Fideler is a writer and philosopher. He’s the editor of the Stoic Insights website and author of the book Breakfast with Seneca: A Stoic Guide to the Art of Living, which is the first clear and faithful guide to the practical teachings of Seneca.

This article contains excerpts from Breakfast with Seneca: A Stoic Guide to the Art of Living by David Fideler. Text and original translations copyright 2022 by David Fideler. Used with permission of the publisher, W. W. Norton & Company, Inc. All rights reserved.