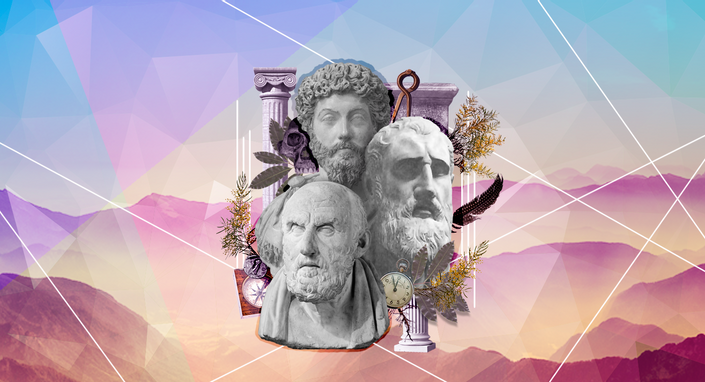 Recently, a restaurant in Qatar that serves pieces of roasted meat covered in gold amid great fanfare has drawn our attention. But what’s wrong with gold-covered steaks? What would the ancient Stoics and Diogenes the Dog have said about this?

The first point I will highlight is the connection between Stoicism and Cynicism, revealed primarily by the search for simplicity and an uncomplicated life. We can see Diogenes as a Socrates who is taking things to extremes, seeking happiness by betting on poverty. For Diogenes, it is possible to be happy with little. Thus, according to an anecdote that has come down to us, Diogenes, when he saw a boy drinking water from a fountain with cupped hands, threw his cup away, saying that a simple boy had taught him that even he, Diogenes, had superfluous things. And something similar happened when he saw a boy eating lentils on unleavened bread, which caused the Dog to throw his plate away.

The Etruscan Stoic Musonius Rufus reflects from these same premises. For this philosopher, luxury in homes is pointless, meaning wasted resources and not representing any gain either for the homeowner or for the community in which he lives:

Since we make houses too for a shelter, I argue that they ought to be made to satisfy bare necessity, to keep out the cold and extreme heat and to be a protection from the sun and the winds for those who need it. In general, whatever a natural cave would offer, furnishing a moderate shelter for man, this our houses ought to furnish for us, with just enough to spare to make a convenient place for storing away man’s food. What good are courtyards surrounded by colonnades? What good are all kinds of colored paints? What good are gold-decked rooms? What good are expensive stones, some fitted together on the floor, others inlaid in the walls, some brought from a great distance, and at the greatest expense? Are not all these things superfluous and unnecessary, without which it is possible not only to live but also to be healthy? Are they not the source of constant trouble, and do they not cost great sums of money from which many people might have benefited by public and private charity? How much more commendable than living a life of luxury it is to help many people. (Musonius Rufus, Discourse 19. Translation by Cora E. Lutz.From Volume X of the Yale Classical Studies, Yale University Press, 1947)

This reflection extends to domestic utensils, which must also only fulfil the functions for which we originally designed them:

Related to and in harmony with extravagance in houses is all the matter of furnishings within the house—couches, tables, coverlets, drinking cups, and similar objects—completely surpassing all needs and going far beyond necessity. There are ivory and silver, yes, even golden couches, tables of similar materials, coverlets of purple and other colors difficult to obtain, cups made of gold and silver, some of marble or some similar material rivaling gold and silver in costliness. All these things are eagerly sought for, although a pallet furnishes us a place to lie on no worse than a silver or ivory couch, and a rough cloak is quite as suitable to cover it as a purple or crimson coverlet; it is possible for us to eat quite safely from a wooden table without longing for one of silver. Yes, and one can drink from earthenware cups which are quite as good for quenching the thirst as goblets of gold; and the wine which is poured into them is not tainted, but yields a fragrance sweeter than from cups of gold or silver. (Musonius Rufus, Discourse 20. Translation by Cora E. Lutz. From Volume X of the Yale Classical Studies, Yale University Press, 1947)

Epictetus also speaks in similar terms in his Manual when he states:

Each man’s body is a measure for his property, just as the foot is a measure for his shoe. If, then, you abide by this principle, you will maintain the proper measure, but if you go beyond it, you cannot help but fall headlong over a precipice, as it were, in the end. So also in the case of your shoe; if once you go beyond the foot, you get first a gilded shoe, then a purple one, then an embroidered one. For once you go beyond the measure there is no limit. (Epictetus, Manual, 39. Translated by W. A. Oldfather, 1928)

But what limit do we go beyond in this case? Why would a simpler life be better than a luxurious and ostentatious existence? Why can’t a house or a utensil be adorned beyond the use we originally intended for it? Wouldn’t the Stoics and Cynics be tiresome with their recommendations about the simplicity of life? Why, after all, wouldn’t it be excellent and praiseworthy to go around boasting of one’s wealth, beauty, and power?

We can reflect on this from the meaning of the word ostentation, which comes from the Latin ostentare, which means to expose, display, or show. We can say that those who boast want to obtain some happiness through ostentation, making their happiness depend on the judgments of others about their person. The one who boasts thinks: “I will show my wealth, my beauty, and my power, and everyone will admire me! And this admiration will make me happy!” Diogenes and the Stoics perceived this idea as mistaken and part of an equally erroneous conception of what a human being is. According to this common-sense view, human happiness depends on power, beauty, and wealth, which are indifferent to these philosophers since we can use them well or badly. Thus, e.g., misused wealth will bring unhappiness. And the same goes for other indifferent things. For Diogenes and the Stoics, what distinguishes a human being from others is a certain wisdom that allows good use of indifferent things. Thus, the mistake of those who boast is to think that they will be happy by boasting, that others will admire them, when, in fact, they will generally inspire envy and make themselves dependent on the judgments of others. This dependence is, in fact, the supreme source of unhappiness because it leads humans to act according to what they think will please others and not do what in their hearts they intuit will make them happy.

I believe that Diogenes, the Dog, masterfully summarizes this reflection of mine in a performance which I paraphrase as follows (from Diogenes Laertius VI.32): One day, a wealthy man invited Diogenes to his mansion. During the visit, the rich man showed him the costly objects collected in his residence: “See that statue,” said the prosperous man, “it is a Corinthian bronze, don’t spit on it.” “See that rug,” observed the nawab, “it is costly, do not spit on it.” “See that pitcher,” added the boastful one, “it is rare and ancient. Don’t spit on it, please.” After hearing such remarks, Diogenes gathered a lot of spit in his mouth, and when he already had a good amount of the sticky liquid, he spat it all right in the middle of the millionaire’s face, who, astonished, asked him why on earth he had done such a thing. And Diogenes answered him: “Your face was the most ordinary place I found in your house.” Moral of the story: he, who seeks validation by displaying his power and wealth, shows that he has nothing sound in human terms to offer, becoming a vain and pathetic person and losing all value to himself and others while a human being.

So you might even eat your golden steak, but that contradicts the simplicity recommendations of Stoicism and Cynicism, for which genuine happiness does not come from satisfying unworthy desires. Also, eating that golden steak to show off will reveal that you live according to other people’s opinions, leaving yourself aside and living according to others. In the first case, you will make your life more difficult by making yourself dependent on expensive and useless things. Second, you will be unhappy because you will make your happiness dependent on other people’s opinions, not your actual needs.

However, an additional point must be noted, which is the most important for me. It’s one thing to show off in a society where people have the bare minimum to live. It is quite another to show off in front of the miserable and hungry, as many wealthy Brazilians customarily do in Brazil and elsewhere. One of the fundamental themes of Stoicism is the issue of affection and empathy toward other human beings. Hierocles observes that one of the objectives of Stoicism is to extend the natural love we feel for ourselves and our family members to the other citizens of our country, ultimately reaching all humans. Thus, feasting in front of hungry people and displaying greed in front of the miserable is a clear demonstration of a lack of affection, empathy, sensitivity, and humanity — in short, in Stoic terms, an evident demonstration of profound ignorance. And someone could ask: would the amount of money spent on a banquet solve the problem of hunger and misery in any country? Certainly not, but at least anyone who put aside these displays of ostentation, employing these resources to satisfy even a few people’s hunger, would show that he is not insensitive to human suffering. This person would reveal that the dignified survival of those around him also concerns and affects him and that he can love them and care for them as his brothers and sisters.

Aldo Dinucci is Professor of Ancient Philosophy at the Federal University of Sergipe in Brazil, the Editor in Chief of Προμηθεύς, and has published, among other books, translations from Greek to Portuguese of the Manual of Epictetus and Epictetus Discourses, Book 1 .