What Readers Are Saying About Stoicism Today Selected Writings Volume 3

Modern Stoicism published volume 3 of Stoicism Today Selected Writings late last year, just a little over three months ago.  It is available in both paperback and Kindle versions.  Enough time has passed that we wanted to see what people had to say about it. We’ve got a number of contributions from a variety of people that might give you some idea about what you can find in this volume. These include reviewers, people in various Stoicism groups, contributing authors, my co-editor and other colleagues, and even a kind word from one of the founders of Modern Stoicism, Professor Christopher Gill. 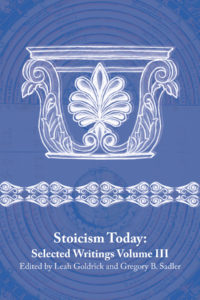 I would like to stress again that the profits from readers purchasing Stoicism Today volume 3 go straight to the Modern Stoicism organization, so if you find the work and activities we provide and promote valuable, that could already be a good reason to get a copy for yourself!  It’s also, if I do say myself, admittedly with a bit of bias, a great selection of 37 high-quality, well-written and researched pieces on a vast variety of topics, all of which have to do with Stoicism.

At any rate, here’s what people have to say:

This is a wonderfully rich and accessible volume, and a very worthy successor to the two earlier volumes edited by Patrick Ussher. The volume includes insightful academic discussions by distinguished scholars such as Tony Long, Julia Annas and Margaret Graver. There are also suggestive, and sometimes moving, contributions from those actively involved in offering Stoic guidance and from people in other walks of life who have found value in Stoic writings. The volume also illuminates Stoic approaches to a range of real-life contexts, including family and workplace settings and to contemporary issues, for instance on social justice and environmental ethics. Other essays explore the relationship of Stoicism to Buddhism and Stoicism as a form of therapy. The collection has much to offer those new to Stoic ideas as well as those for whom it is already well-known. It is expertly edited and beautifully presented.

Before reading this book I already knew that Stoics tend not to be cold-hearted and emotionless, even though they see virtue in being dispassionate. The contributors helped me to understand why that is so. The contributors also shed light on several questions about Stoicism that have been lurking in the back of my mind. Do modern Stoics follow Marcus Aurelius in viewing the natural world as a purposive system? How does the Stoic view of training the self complement Aristotle’s view of practicing the ancient virtues? How did prominent Stoics view the techniques of child-rearing described in Plato’s Republic? What are the similarities and differences between Stoicism and Buddhism? To what extent do modern psychological therapies, such as REBT, draw upon ancient Stoic insights? In the differing perspectives they offer, the contributors demonstrate that Stoicism can be viewed as a developing school of thought rather than just an ancient philosophy. This book is much more interesting than the title might suggest!

Caveat: I have not yet read the entire book as of yet. I have bounced around, reading the essays that most interested me. There is a wealth of practical and theoretical information here. This book deserves a place on my “Suggest this book to new Stoics” list. It also has the added benefit of collecting essays I often think about, but have some trouble finding.
Everyone should be quite proud of this book. I went to Margret Graver’s “The Dispassionate Life” and at this moment it remains my favorite piece. Graver draws the distinctions between the various school’s beliefs on apatheia very well. A close second is AA Long’s “Stoicisms Ancient and Modern”. Especially the bits about virtue and beauty.

The collection of essays in Stoicism Today, Volume III, so wide-ranging in scope and style, clearly demonstrate the wealth and adaptability of Stoic philosophy as a set of intellectual and practical tools for personal and communal lives. Aside from the essays concerned with practical matters, ranging from parenting, physical health, farming and sustainability, medicine and surgery, a few essays explore historical and cultural themes related to Stoic philosophy and its continuing relevance. The essays are accessible, concise, and driven by clear questions–qualities  that preserve something about the original medium of the essays, namely Modern Stoicism. I’d recommend this volume to anyone interested in exploring Stoicism and its varied expressions and applications.

An enriching new book graces my table! It is Stoicism Today: Volume III, Edited by Leah Goldrick and Gregory B. Sadler. For anyone wanting to educate themselves about Stoic philosophy and practices, for anyone wanting to add to their knowledge of Stoicism, for anyone wanting to embrace information about the broad and life-enhancing applications of this approach and way of life, and for anyone who enjoys the type of book one can just pick up anytime, open, and be informed or reminded of good nourishing material for the mind and spirit – this is a great book for you, one I joyfully and highly recommend!

This curated and well-organized volume of essays from Stoicism Today brings together pieces that will appeal to most people interested in Stoicism. The collection covers a broad array of topics, ranging from applying Stoicism to your life to some subtleties of Stoic theory. Some of my favorite Stoicism Today essays are in this volume.

This book was wonderful to edit because I was able to deepen my own understanding of Stoic philosophy while also enjoying the actual work. Since I read each contribution more than once during the editorial process, I have more easily retained (and been able to apply) what I have learned to my own life and practice. I have my favorite authors and contributions of course, and these are the essays which offer the most applicability to my own interests and challenges. I’m very grateful to have been a part of this project. Books of essays have something for everyone since they include many diverse voices, and this one is no exception. I have given the book to friends and family unfamiliar with the philosophy, and each of them found something of interest and value. Stoicism Today: Selected Writings Volume 3, most definitely contains bits of wisdom for dealing with both the Modern and perennial challenges of the human experience. It is my hope that readers will find this book to be enjoyable and insightful.