Memorize the Stoics! by Kevin Vost

Begging your pardon for diving into this topic in medias res, but I hope to make clear soon why I’m starting where I’m starting, and what we are really doing – after we’ve done it.  With that said, I ask you to place your powers of concentration and imagination on high, as I invite you to walk with me to a very special porch.

Welcome to the Porch of Memory

Your very first glance reveals that this is no ordinary porch attached to my house, but the famous Stoa Poikile, the “Painted Porch” in Athens, Greece upon which Zeno taught, and from which the Stoics took their name! 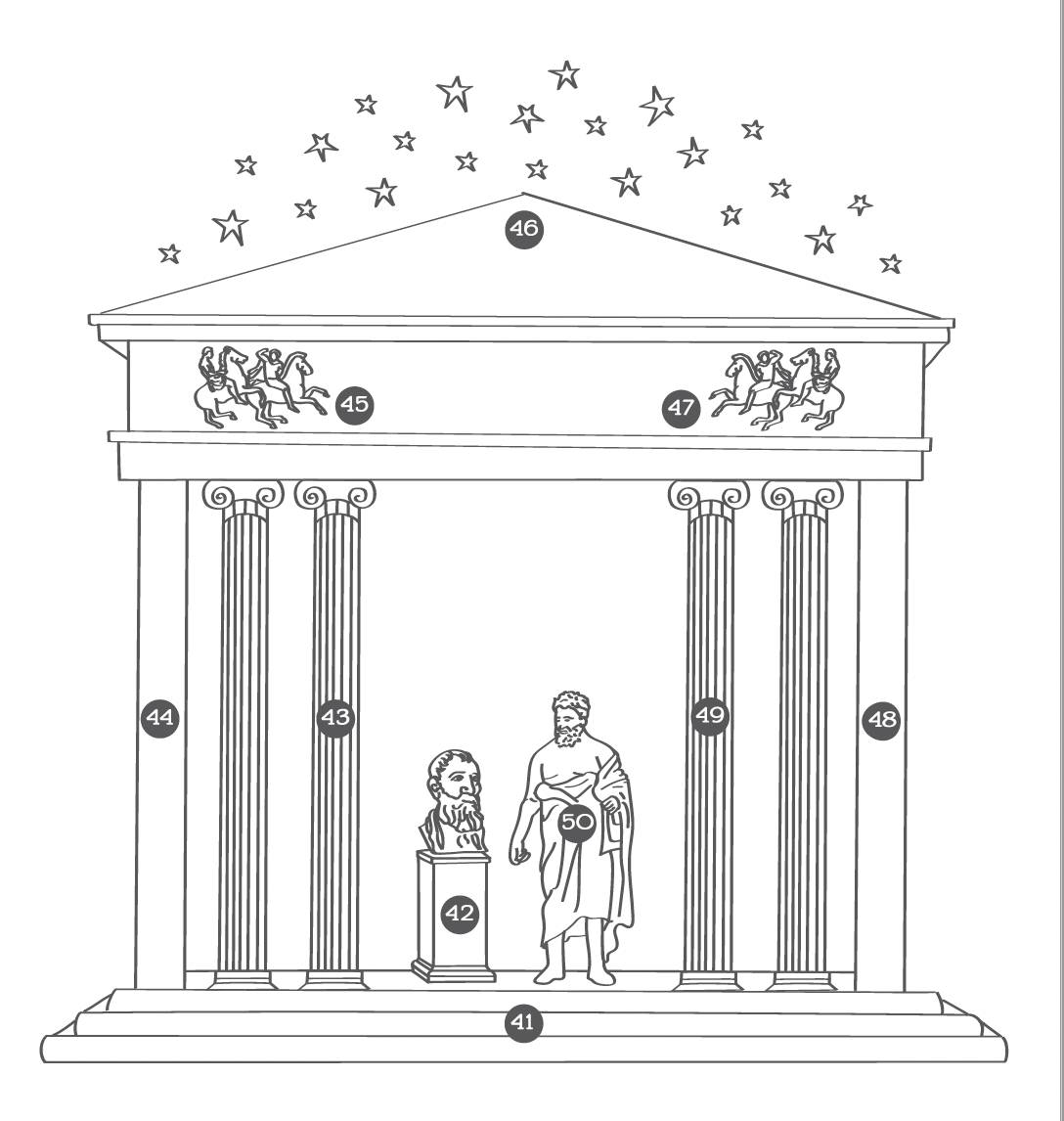 (Our illustration, crafted by Kelsey Noelle Vost, is greatly simplified and modified for our mnemonic needs, but If you’d care to see what remains of the Stoic’s Painted Porch in our day, I highly recommend this video tour courtesy of “StoicDan.”)

Imagine that you first notice an odd sight upon the front steps (location 41) where an enormous bodybuilder with a very tiny head stands there flexing and staring at his muscles. Upon the porch and off to the left, sitting atop a short pedestal, is a bust of Zeno himself (42). You spy yourself right behind it, smiling and gently patting the back a person who just insulted your honor!

How odd that a pillar just to the left (43) depicts your own brother, but instead of arms he has handles protruding from his side.

Leaning against the left wall (44) a sneering miser looks down at you.

What an odd thing, you think next, for the beauty-loving ancient Greeks to adorn the frieze above the left wall (45) with a smelly wino lying in a gutter.

Above the apex of the porch, you see a starry night (46) and two people crouched on the peak. The person on the left is looking right over Socrates’ head, paying him no attention.

At the right frieze (47) you see another friend and hero of the Stoics, Diogenes the Cynic, hugging one of the statues depicted in bas-relief. Can’t imagine what Diogenes looked like? Well, the word Cynic came from the Greek “kyōn,” meaning dog (similar to the Latin “canis” from which we derive “canine”). Just picture a man with the head of a dog hugging the statue.

Right underneath, standing in front of the right wall base (48), you find three people standing there, one short, one of medium height, and one tall.

In front of the right pillar (49) is yet another great Stoic, and one of Epictetus’ favorites, Chrysippus. He’s writing something down on a tablet, unfortunately quite illegibly. (If you’re having trouble forming a mental image of Chrysippus, feel free to simply substitute a person you know named Chris.)

Finally, to our great surprise, who should stand teaching in the center of the Stoa (50), but, straight from Nicopolis – Epictetus himself! He calls you up to stand by him and hold for him some stone tablets. The first two columns of this table summarize what we’ve done so far:

The table displays the particular ordering system we employed (places on the porch itself) and the visual images we placed in each location. Now, the numbers of these locations refer to the numbered chapters of Epictetus’ Enchiridion or Handbook.  The images serve as unusual, and therefore, hopefully memorable reminders of one key lesson found in that particular chapter. In chapter 41, for example, Epictetus says it is the mark of a small mind to be excessively focused on the concerns of the body at the expense of the development of one’s mind, and hopefully that tiny-headed muscle man will serve as a pretty straightforward reminder of that chapter’s lesson.

In my new book Memorize the Stoics! The Ancient Art of Memory Meets the Timeless Art of Living, six chapters of the book’s first part provide exercises to remember at least one key lesson from each of the 53 brief chapters of the Handbook, in their exact order, indeed, actually forward and backward. The second part does the same for the first 50 of Seneca’s Letters, and the third part of the book zooms in on memorizing some lessons from our Stoic Emperor, Marcus Aurelius too.

Now the reason I jumped in at chapter 41 in this article is that the memory system for this book is based primarily on common locations within a modern house. At location number 1, for example, the front door opens and you see a jetfighter’s cockpit with two control panels. Why, because the first line of the first chapter of the Handbook is that “Some things are under our control and some things are not under our control,” yes, the famous “dichotomy of control.” Further, the memory image of the control panel within a jet fighter’s cockpit is in honor of James Stockdale, a famous modern Stoic who used the lessons of Epictetus to preserve his dignity and sanity during almost eight years in a North Vietnamese prison camp.

So, each little room of the memory house, holds the images and lessons of 10 Handbook chapters. We move from an entranceway to a living room to a dining room and on to a study which hold the images and lessons of the first 40 chapters. It was at that point that I thought, why not add-on a porch, and not any old porch, but a stylized version of the very porch from which Zeno first established Stoicism? Since I planned to use only one illustration for this article, I thought that students of Stoicism would find the porch far more interesting than my own entranceway.

Now, a very important principle to bear in mind, that the locations within “memory palaces,” as they are often called, serve as mental notepads, and the images we place in specific locations are like what Cicero called an “inner writing.” Once you have learned a particular set of locations, it can be used again for completely new information. That’s why we use the same memory house in the book’s part two to memorize lessons from the first 50 letters of Seneca. This time, for example, at the Stoa’s steps we imagine that a dove has flown inside a Stoic student’s lungs Why? Well, in his 41st letter Seneca says that a sacred spirit (spirit deriving from the word for breath) resides in each one of us. The dove borrows Christian imagery wherein the dove represents the Holy Spirit.

So, why might we want to do such a thing as memorize these lessons? Well, even in the very brief Handbook, Epictetus states a good dozen times that we should “remember” or “keep in mind” important Stoic lessons. This method can help us do precisely that.  I should note as well, that in Memorize the Stoics! the little memory tours are merely the starting point. After the tour, I provide a summary of the actual Stoic writing our lesson comes from and then I provide a little of my own commentary. Please allow me to provide just one simple example from the exercise we did.  The omega symbol (Ω) shows where Epictetus ends and I begin.

The Lessons behind the Images: Handbook Chapter 44

Hopefully you will recall that at the left wall a sneering miser looked down upon you. Obviously, he thinks he is better than you, but in reality, he is only richer. Riches are external things that are not up to us, and are therefore indifferent.  We could also imagine a great orator by the miser’s side, looking down at us too because his voice is more powerful and melodious, but again, good for him perhaps, but there’s far more to a person than eloquent speech.

I first encountered the Stoics in the early 1980s through the writings of psychologist Albert Ellis.  As I prepared a research paper for a clinical psychology course on his Rational-Emotive Behavior therapy, I scoured the library for virtually anything written about it, in the days of yore before the Internet.  I’ve not been able to track it down again, but I recall an article by Ellis or another REBT practitioner on the then hot topic of “self-esteem.” The gist of the article was that we should give all give ourselves the unconditional self-esteem that is due to every person and not go around berating ourselves or comparing ourselves to others. The key recommendation was not to rate oneself as a global, capital “I” at all, but to think of oneself as a series of many lower case “i’s” in one’s many roles.

So, in Epictetian terms, if one failed at becoming rich or a renowned public speaker, one would not think “I” am a failure, but perhaps “i” as a businessman or “i” as an orator are not so hot, but come to think of it “i” as a friend, or “i” as a parent, or “i” as a Parcheesi player am really not so bad.  We all have many “small i” roles to play, but the only utterly essential “capital I” role regards our “capital P,” not Parcheesi, but Prohairesis. What we really are down deepest is our moral character. We need not berate ourselves if others with more worldly success look down upon us. Neither should we look down upon others if we should prove successful in indifferent things.  One form of vanity, you will recall from Handbook chapter 6, is to boast about trivial things.

So, there is a simple sample of what readers will find in Memorize the Stoics!  It also provides historical background on these methods and how they relate to the Stoics. For example, Cicero, though he did not consider himself a card-carrying Stoic, is a particularly valuable ancient source for both Stoic philosophy and this particular art of memory. Further, medieval sources suggest that Seneca may have written a treatise on memory improvement that is no longer extant, and we know from reliable sources that Seneca the Elder, our Seneca’s father, “a teacher of rhetoric, could reportedly repeat two thousand names in the order in which they had been given; and when a class of two hundred or more students or more spoke each in turn a line of poetry, he could recite all the lines in reverse order, beginning with the last one said and going back right to the first.” (Frances A. Yates, The Art of Memory, p. 16.)

So, there’s just a preview of how the ancient Greco-Roman art of memory might help us remember key lessons of the ancient Stoic art of living, so that we might come to know them “by heart” and come to live them out in the acts of our daily lives.

Kevin Vost is the author of more than two dozen books, including The Porch and the Cross: Ancient Stoic Wisdom for Modern Christian Living, and Memorize the Stoics! The Ancient Art of Memory Meets the Timeless Art of Living.